To get to Huaraz from Lima I took an 8 hour bus ride ( Oltursa bus cama- incline 140 degrees).  Spent the night a hotel where I also booked the day for the following day.

Day started at 6:30 am when I was picked up to join a bus load of adventuristas. I was the only one on this trip solo.  We drove for almost 2 hours before stopping for a quick breakfast and another 1.5 hours to start the hike.

Our tour guide explained that we had to get up to the lake in 3 hours max (it was almost 10am when we started) and be back on bus by 3:30pm. He had extra oxygen just in case someone struggled with breathing and energy power to mix with water with anybody felt weak or lightheaded. (Pretty serious stuff). But of course I thought that I was all good. We were starting this hike at almost 300ft above sea level so that was already a struggle.

At this time several tours were already at the site and we all started together.

The so-called athlete and competitor inside of me did want to be the last one up the mountain but I was struggling right at the beginning. Apparently our tour was full of skilled hikers. They all took off pretty quickly. I listened to music, danced, prayed, cried (on the inside), maybe cursed a bit, took many water breaks, cheered on others until to the point where I was giving up. The tour guide who stayed way behind on purpose finally caught up to me and said that time is running out and maybe I should head back to the bus. I saw many people turning back because it was becoming very difficult and to avoid any serious health issues. I could see the picture of the lake in my head and how far I had gotten and said HELL NO! I will make it to the top. Bought was energy power from him to mix with the little bit of water I had left and was on my way. I was DETERMINED! He even offered to carry my bag to get through a really steep area which helped a lot! 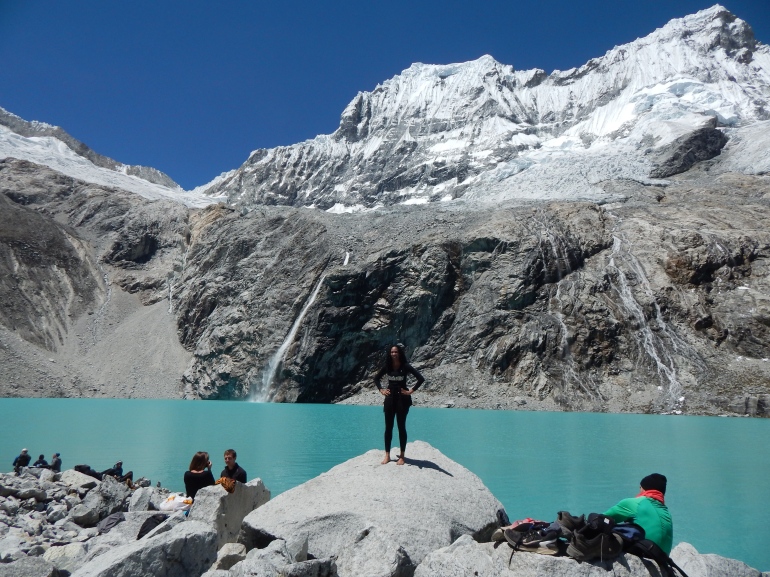 Everything was forgotten.  Even though I only had 20 mins max to enjoy it, I MADE IT!!! It was a really proud moment.

The hike back down was very easy.